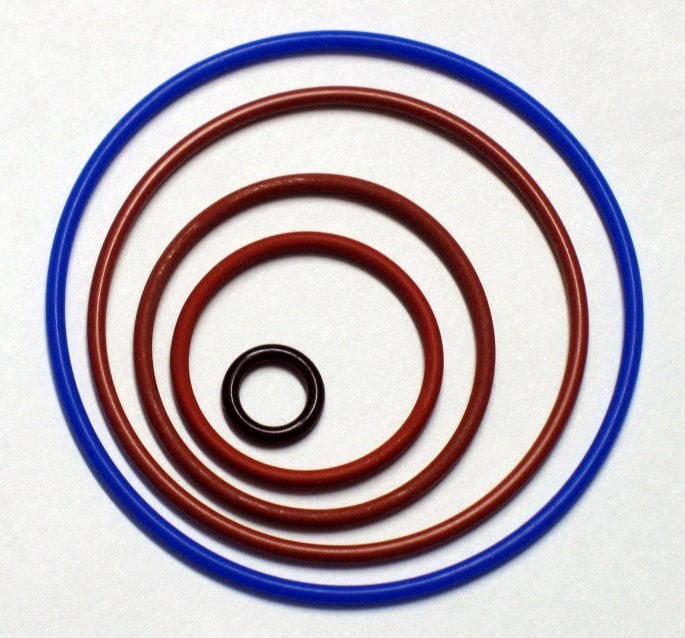 O-rings fail for many dozens of reasons. In simple failures, processes can be compromised and workflows shut down. In serious situations, O-ring failure can lead to disastrous effects. O-rings themselves aren’t particularly prone to failure, but the exacting circumstances in which they’re used create an environment where mere degrees or micrometers matter. Properly made and installed O-rings aren’t just a nice-to-have within industrial and chemical processes, they’re a necessity.

What are some of the most common causes of O-ring failure, and how can they be prevented?

Out-gassing is caused by ingredients within the elastomer being volatized under vacuum conditions. This volatilization can occur during the natural decomposition process or accelerated because of other gasses trapped inside the polymer matrix during molding.

O-rings made from pure polymers and no volatile ingredients are less prone to outgassing. It is imperative that O-rings be properly temperature-rated for their application to avoid out-gassing.

Failure Cause: Chemical Attack or Swell

Certain chemicals cause certain elastomers to react. When O-rings are chemically attacked, they can become brittle, soft, tacky, or less strong than before. When O-rings swell, it’s usually because of ingress of a similar chemical compound. Both conditions lead to loss of shape and integrity.

Working with an experienced O-ring partner ensures the correct chemical materials are used based on the parameters of the end-application.

O-rings subject to elevated temperatures are most at-risk of compression set. By taking on the flattened surfaces of the grooves/glands they encounter, O-rings can lose their elasticity which results in increased leakage over time.

Certain materials have a lower compression set and/or higher temperature capability. The polymer’s chemical structure is also important during manufacture. During use, gland design should also be monitored to watch for over-compression.

High stresses and high friction are the most common causes of nibbling/extrusion which can be identified by a nipped or “frilly” appearance on the edge of an O-ring. When an O-ring becomes trapped between the sharp edges of mating surfaces, the edges of the component can degrade.

Harder seal materials have been used to prevent extrusion. It is also critically important that O-rings be sized and installed properly to decrease clearance gaps and minimize the possibility of nibbling.

O-rings are surprisingly complex pieces of industrial equipment. The right O-ring can make the difference between a frustrating process and a successful one; it can also save your operation a significant amount of time and money.

Wyatt Seal is the seal partner your company has been looking for. We have decades of experience helping operations determine the best sealing devices for their applications. Would you like to learn more about our extensive array of in-stock O-rings or even about our custom seal capabilities?

Reach out today to talk to a Wyatt Seal specialist.

Ready to talk? Reach out to us.